So you’re saying to yourself “Hey, I wonder what ever happened to that Kythe dude.  He was posting a whole bunch of stuff in the fall but now, nothing.”

Rest assured I’m not sitting on my Christmas Laurels.  It’s been a busy holiday season.  I’m sure you can relate that up until Christmas, you’re running around like a Mad Hatter.  Pair that with the fact that I’m also the Seneschal (President) for the local chapter of the SCA (Society for Creative Anachronism)  and our biggest event of the year was just last weekend: “BIRKA”.  Big merchanting event where I was helping with the Arts & Science display and coordinating a Panelling for brewers attempting to move up the ranks of the East Kingdom Brewer’s Guilde

I was apprenticed almost 2 years ago and along with my own studies and projects, I’m expected to be teaching my craft to others.  I’ve always felt the best way to instill your own knowledge is to pass that knowledge onto others because it reinforces the material with yourself.  To date, I’ve taught close to 15 classes on various subjects: Hop Farming, Whole Grain Brewing, Sekanjabins, Tasting and a few others that escape me at the moment.  I’ve had 2 classes over the Holiday Season (1 in Nov and another Mid January). 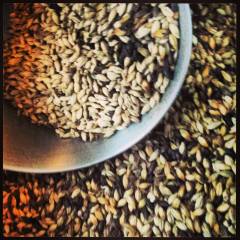 Usually it has to be on the largest setting because if the grain is broken too small we’ll be eating oatmeal for weeks.

And then there’s the various projects.  Over the holiday season I’ve done 2 Belgian Pale Ales, a Dopplebock, Maple Hard Cider (finish), Crabapple Cider (finish), Apple Beer¹, Raspberry Beer², Cider³, and a Belgian Quad with Cherries and Raspberries.  That’s not including the 2 gallons of Apple Cinamon Mead that I’m “storing” for a friend. 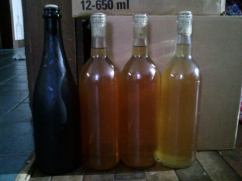 Belgian Quad with Cherries and Raspberries 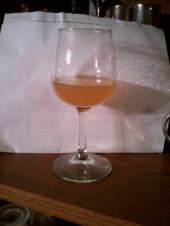 So we haven’t completely gone dormant.  As soon as the waterheater in my house gets replaced with a new propane hot water on demand system, we’ll be probably well into our next project which you’ll see details of here soon.  Trust me, it’ll be worth the wait.